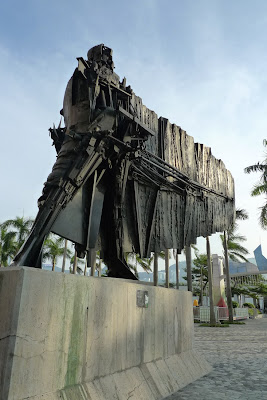 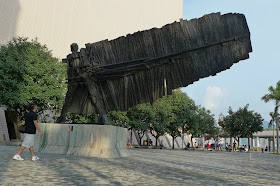 ‘The Flying Frenchman’, originally named as ‘The Freedom Fighter’ by the French sculptor César Baldaccini, 1991.  With a whiff of conundrum, the plaque only attributes the sculpture to a name called César.

Originally a very powerful message, the artwork has been widely misread against its symbolic support for democracy in Hong Kong.  With 1989 Tiananmen Massacre in context, the bronze fighter stands precariously with one overscaled unbroken wing.  It was meant to be called “The Freedom Fighter”, but under pressure from the government, the Cartier Foundation succumbed to the request and adopted the bemusing name of ‘The Flying Frenchman’ (翺翔的法國人).  Cesar Baldaccini (1921-1998) should have known there would be compromises from commercial patrons even in the likes of Cartier.

Update: On June 4 of recent years, the sculpture has turned into a locus where candle-lit gatherings for victims of the massacre are organized.

On June 4, 2014, the open piazza at the Cultural Centre,
Hong Kong was renamed as 'Freedom Fighter Square' in commemoration of the Tiananmen Square Massacre. 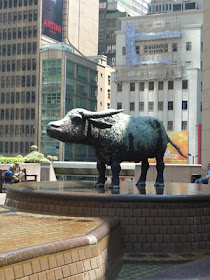 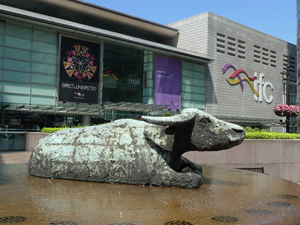 The ‘Man-n-Ox 1 and 2’ by the English sculptor Elizabeth Frink (1930-1993) have the simplicity of effective communication with the audience.  The sturdy postures, oxidized patinas and Asian looks are appealing and consistent with Frink’s naturalistic approach.  Of course their vicinity with the Hong Kong Stock Exchange is a remarkable reference that charms the general public. 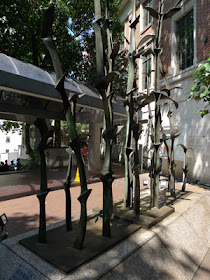 ‘Growth’ by Norman Ko (高華文) in 1999, is a local piece with lyricism that communicates effectively.  The bronze work is found at the Hong Kong University main entrance. 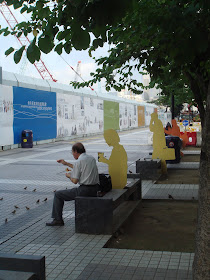 It might not be regarded as a sculpture were it not be named and attributed to.  The architect’s work looks innocent enough if one does not delve deeper into the original motive intended by the relevant department.  The metal sheets in the shape of sitters are meant to block up any potential sleepers on the benches.  To the government officials, anyone lying on the benches in public is an eyesore that must be eradicated.  The architect’s solution is a successful charade that cosmetizes the hidden agenda.  Sometimes I find an architect can do more misdeeds than an uncaring government.  He(she) knows what is against his(her) belief but completes the task according to "due diligence and professional good practices". 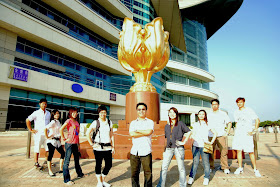 Mainland tourists posing nonchalantly in front of the sculpture.

‘The Golden Bauhinia’ is arguably the most photographed sculpture by visitors from the mainland.  The reactions Hong Kong people have from the piece are completely at odds with these visitors, in a nutshell the former a bag of mixed emotions whilst the latter straightforward euphoria and pride.  It is the most politically charged sculpture but with very little artistic value.  The author of the sculpture is nowhere to be found ever on the internet, a non-standard practice perhaps common in China.

The Ugliest One.  Would it ever be removed? 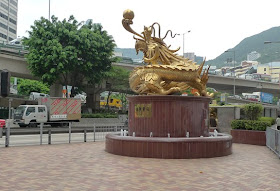 Sculpture sitting on segmented granite base, giving away
its poor execution.  Notice the miniscule fountain near the base, the strangest combination of scale and proportion. 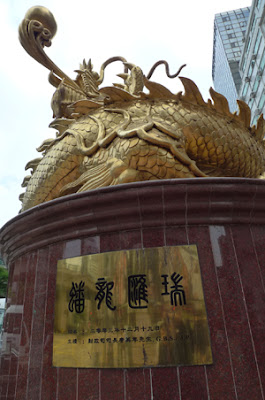 Again without citing its author, the China piece was unveiled by the Financial Secretary of Hong Kong in 2003.  Bizarre practice of attribution indeed.

Another golden piece of work that reveals its China origin is the ‘Coiling Dragon’ (蟠龍滙瑞) located in Wanchai.  It bears no relationship with the surrounding.  We have no idea under what selection process the sculpture was erected in place.  Despite all benevolent explanations one can imagine for its existence in Hong Kong, it is still the worst eyesore in years to come. 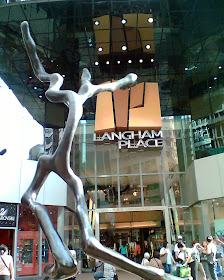 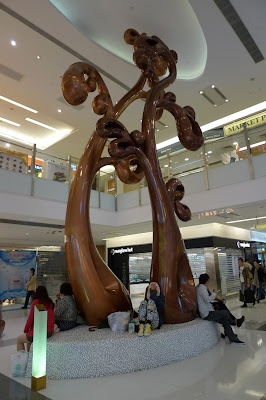 ‘Rooting Tree’ (都市一隅･花) by Lee Chin Fai (李展輝) at
K-11 Mall.  It looks like a cheap bric-a-brac from
dollar shop in gigantic scale.

The Business circle especially the developers have jumped the bandwagon of art appreciation.  The above two sculptures are only part of the many that have sprouted up in many open plazas owned by developers.  The reason, of course, is the upcoming giant commercial development opportunities in the West Kowloon cultural hub.  It is the art portfolios the prominent developers seek to accumulate before jostling for the ultimate deal with the government.  A growing number of local artists have already been feeding from these ever expanding blood sucking property moguls.  Why this antagonistic attitude?  The hegemony of developers is stifling all independent small businesses including those in creative industries.


Talk of The Town 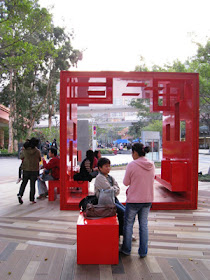 Another local representative of works in the Shatin sculpture garden.  The piece seems to embed the most talked about subject in the territory, ie. obsession in realty.  With a dingy interior and some restrictive openings, it resembles our domestic environs that the public are glad to take shelter in.  On a different note, it borders on being a design work than an art piece, a huge difference yet slipping away in recent years. 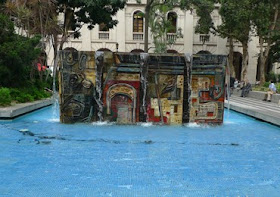 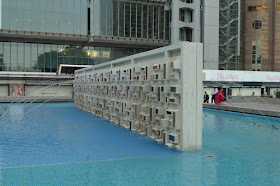 Heavy relief sculpture with modernist overtones,
the expanse of length is breathtaking.

On a quiet day, the cascades of running water make music to the ears.  The two abstract art pieces in a rare water setting used to be an icon of the 50’s and 60’s.  Through years of urban development all over, this well-known piazza has its content much overlooked by the public.  It is to the extent that no explanatory plates can be located except the name of ‘Alan Fitch’ and ‘Cascades’ at are found at obscure corners.  No relevant details are traceable from the government sources and the internet.  Fortunately the sculpture and the landscaped setting are still very well preserved today. 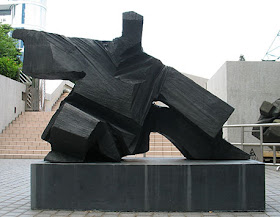 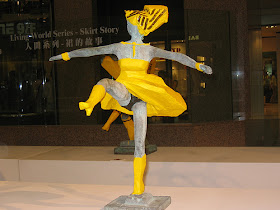 This variation from the ‘Tai Chi’ series by the Taiwanese Sculptor Ju Ming (朱銘) can be summed up as “you see one, you see all”.  The self-styled artist made a fortune by selling these ‘Tai Chi’ sculptures worldwide.  He even opens up a museum for his own works in Taiwan.  Not only losing the magic touch as some critics might put it, but as demonstrated above on his later works, it is a fair comment to ask if this man is a capable artist. 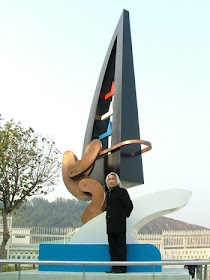 ‘Windsurfing’ (滑浪風帆) by Choi Kai Yan (蔡啟仁) in Cheung Chau, 1996.  The metal parts and paints are in a severe state of disrepair during recent visit. 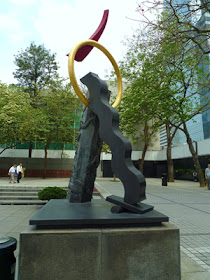 Here are two examples of local sculptures that tried to break mode.  Both attempted to explore the local idioms to create new styles of expressions, in these cases calligraphic strokes, dragon motif, wind-surfing imagery etc.  However the results are less than satisfactory in visual appeals and poetry; their physical configurations and colour arrangements are whimsical regardless of the ethnic origin of the viewer.  Though it is a step in the right direction, more rigorous efforts are expected from the artists.  To be honest, more scrutiny might be required from the commissioning body in order that other artists can have fairer opportunities.


The Copycat with Ominous Touch 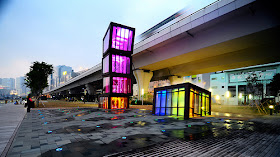 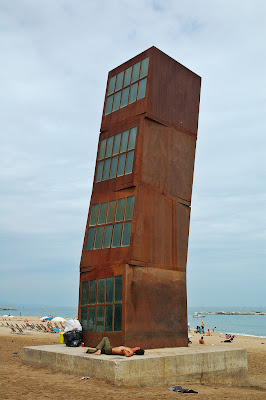 You are bound to find some rip-offs somewhere.  The apocalyptic play of disjointed parts can perhaps be read as an outcry against the mighty developers.  It is the only message I manage to interprete.  Of course in Hong Kong, we have the ever present LED flash neons and sharp finishes that differ from the subdue Cor-ten original. 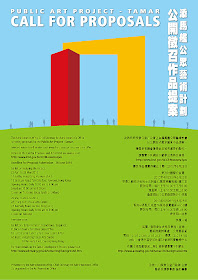 Much anticipation is eyed on the selection of sculptures for the new Government Headquarters through competition held earlier.  With a positive frame of mind, I hope they could ignite a new generation of sculptures by local artists.

A chat of 26 pieces of public art at here.